Hello again, followers. It's been quite a while since I have updated this blog. In fact, so much has happened that I've decided to just explain everything in video format. This video can be found here:

I am certain that Kind von der Ritter mentions me explicitly in the "Memoir" video, and that he is instructing me to go to New Jersey. This screen cap is all I need to convince me that this message was intended for me: 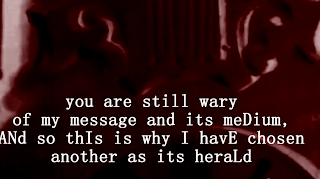 I'm positive he is referring to me (D-A-N-I-E-L) as the "herald" of this message. Perhaps Chris and Alex are not even going to see this video? Although the channel hasn't uploaded anything in over a year, I'd hope they'd at least be paying enough attention to it to notice this video. But if they haven't, I guess I will be the one to bring it to their attention.

In addition to this initial element that caught my attention, during the closing segment of the video, text appears that reads "this weapon is right under your Noses", "Just listen". The capitalized letters spell out "NJ", and from him saying this weapon is "right under their noses" I concluded this means whatever I am looking for can be found near the Dark Harvest boys themselves, in New Jersey.

Aside from this, the video confirmed my suspicions as to the identity of Kind von der Ritter. I am close to positive that it is the Order's own Oracle. After hearing this video speak of KvdR foreseeing the future and other seemingly psychic abilities, it didn't take me long to put two and two together. I could be wrong, but I find the chances of that highly unlikely. What this means for the current state of everything, I have no idea, but it certainly puts things into perspective.

I have already uploaded an image of the key I received on Twitter, and its rather uninteresting, so I don't feel the need to post it again. However, I will show you a photo I took of the letter I received. 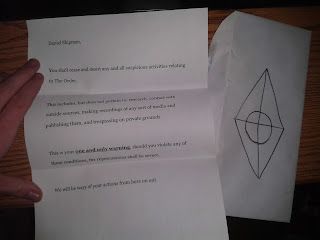 Apparently even cultic secret societies aren't immune to the dreaded form letter. After realizing this message was in fact not a letter inviting me to a PTA meeting, I proceeded to piss myself. But joking aside, this was the moment I realized I had to do something and fast.

I have already contacted Chris and made arrangements to drive down there tomorrow and meet up with him. I feel he's a bit more approachable than Alex at the moment, given his attitude in the past. I hope that we will be able to uncover the secret that will end our problems with the Order for good.